The Northern Canadian Cordillera (NCC) is an actively deforming orogenic belt in northwestern Canada. Geochemical and geophysical data show that the NCC is underlain by a thin and hot lithosphere, in contrast with the adjacent cold and thick cratonic lithosphere to the east. This juxtaposition of cold/hot and thick/thin lithosphere across a narrow transition zone has important implications for regional geodynamics. The recent deployment of USArray Transportable Array and other seismic stations across Alaska, USA and northwestern Canada, allows us to image lithosphere and upper mantle three‐dimensional seismic velocity structure at significantly improved resolution. Our model reveals a broad high‐velocity anomaly across northern Yukon and Northwest Territories, which is interpreted as buried cratonic lithosphere, and which we refer to as the Mackenzie craton. Another prominent high‐velocity anomaly is imaged beneath northeastern British Columbia and is interpreted to indicate cratonic lithosphere beneath the Northern Rocky Mountains. These two mechanically strong lithospheric blocks, also suggested by regional magnetic data, are interpreted to buttress the ends of the Mackenzie Mountains fold and thrust belt, guiding intervening cordilleran mantle flow toward the Canadian Shield and controlling the arcuate geometry of the Mackenzie Mountains fold and thrust belt. Both P‐ and S‐wave models also reveal the signature of a northward‐dipping, subducting Wrangell slab across the southern region of the Alaska/Yukon border. Strong P‐ and S‐wave velocity contrasts across the Tintina Fault suggest that it is a lithosphere‐scale shear zone that extends into the upper mantle beneath the NCC and demarcates distinct regions of lithospheric mantle. 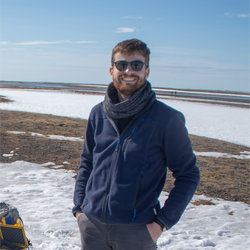